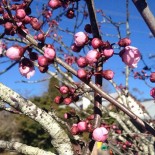 Mercury retrograde, back to visit anything goes Uranus in Aries at 4 Aries. Both being sent a friendly wink from the moon in Aquarius – about 11am in Sydney Australia the moon is at 4 degrees so in sextile.

Uranus can be about the unexpected, flashes of insight, innovation,the broader picture, electricity and eccentricity, Mercury about the mind, facts, figures, bouncing bits of knowledge around, and translation.. add to this the feeling and intuitive nature of the moon in  harmonious aspect and just about anything is possible. Ideas and plans might jump around or change today. New ways of perceiving situations and realities are possible. Inspirations might emerge in unexpected ways.

It is certainly not a bad time to draw on some inspiration or new ways of looking at things from the general environment, reflect on the why’s of things we haven’t been able to fathom, or take some brave steps in a new direction.

This entry was posted on March 18, 2012 by Tuesday in Current sky thought.